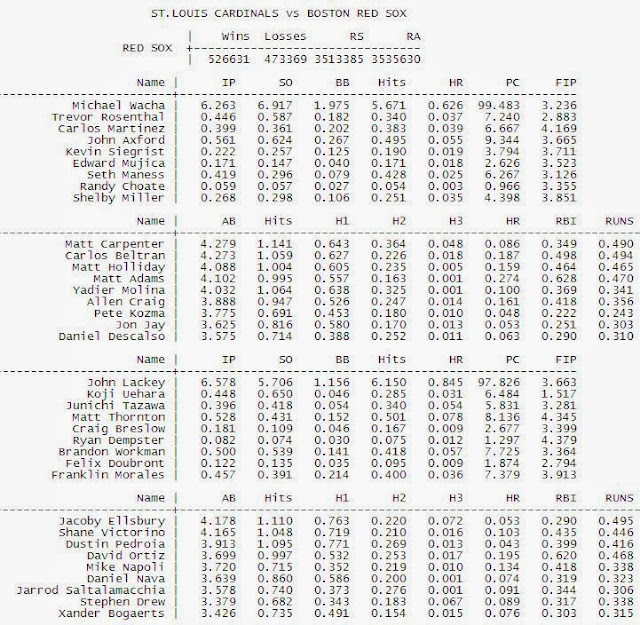 
With a maximum of two games remaining in the 2013 World Series this is the last installment of the reverse engineered game odds.  The only unknown left is the odds for Game #7.  The Game #6 odds and the final series winner odds are both out and from those two knowns we can reverse engineer what the Game #7 odds are (or should be).

And using the nifty spreadsheet calculator that one of my readers made for me, we can also see the chances that each team wins the series in X number of games.  There are only three possible outcomes left obviously and they are the Red Sox winning in six or seven games or the Cardinals winning in seven games.  Here is another table showing those odds.

Posted by Xeifrank at 8:41 AM No comments: 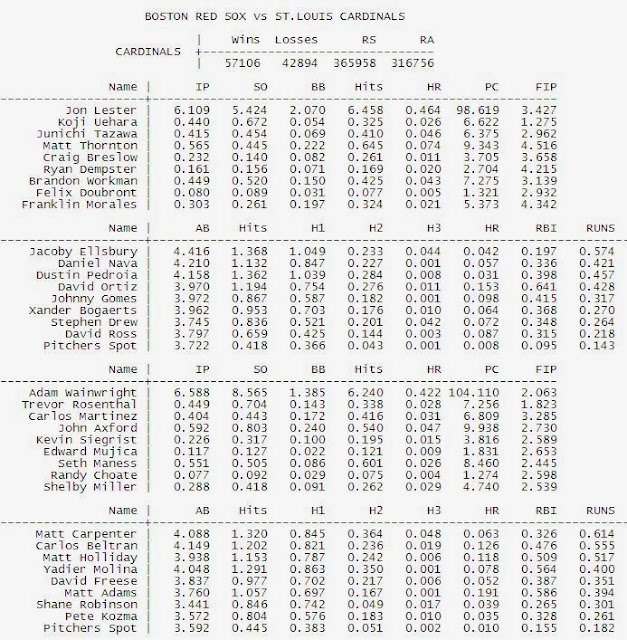 Posted by Xeifrank at 8:52 AM No comments: 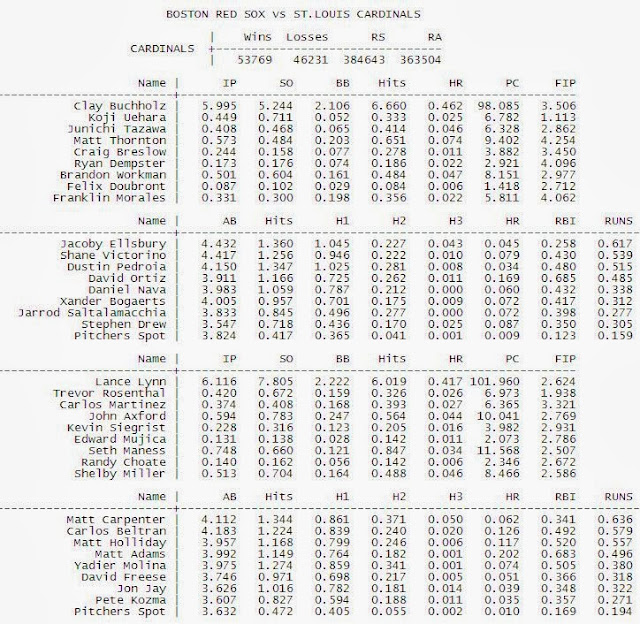 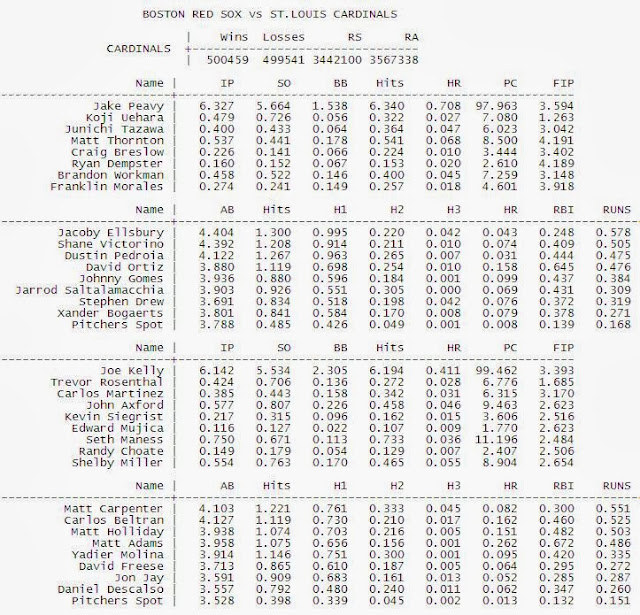 Here is a look at the table with the individual game odds.


And here is a table with the chances of the series ending with one team winning in X number of games.


Notes
- HFA of 4% is assumed
- Data was computed with spreadsheet provided by one of my readers.

Posted by Xeifrank at 9:01 AM No comments:


Vegas has come out and given the Red Sox a 68.75% chance of winning the World Series.  So I am going to try to reverse engineer the odds of the remaining games as if we didn't know who the pitchers were, just where the games were being played (no advanced handicapping).  What we know is that the Red Sox were a 53.9% favorite in Game #1 and are a 53.4% favorite in Game #2.  Knowing the odds in Game #1 gives me a hint at the odds in Game #5 (assuming 4 man rotations and HFA of 4%), so I am going to subtract 8% from the Game #1 odds and give the Red Sox a 45.9% chance of winning Game #5.  I can do a similar thing with the Game #6 odds, as I can copy the Game #2 odds as that game will be played in the same park.  Now I just need to massage the numbers in games 3,4,5 and 7 in an attempt to make the Red Sox chances of winning come as close to 68.75% as possible.  The game 7 odds will be an 8% difference of the game 3 odds.

Using the nifty spreadsheet that my reader gave me in one of the previous similar exercises I did in the NLCS we come up with the following table of individual game odds needed to have the Red Sox be 68.75% favorites to win the World Series following the Game #1 results.  To take this to the next level you would break down the odds of games three and four by looking at the probably starting pitchers.  Where one of the two games would move up in odds, the other would need to move down.


And below is the table that shows the percent chances and odds of each possible result in the World Series. 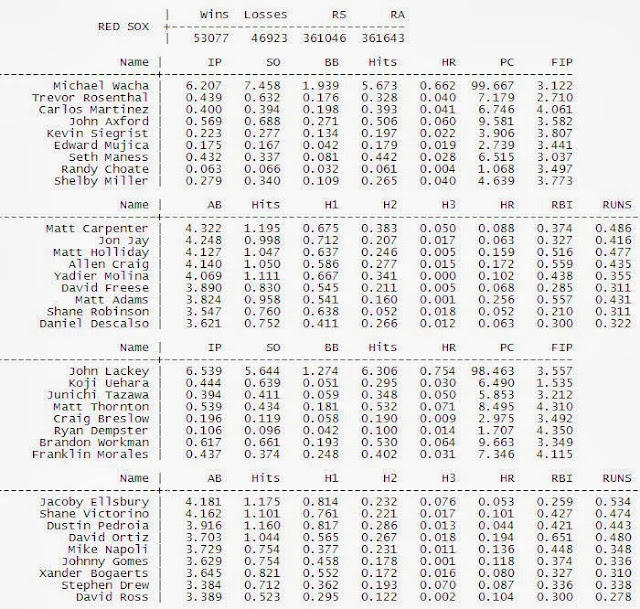 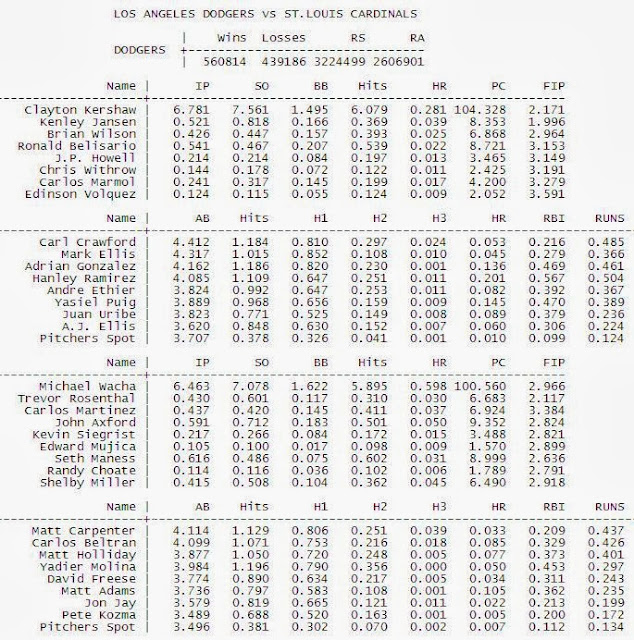 The Odds Couple of Games


Vegas now lists the Dodgers chances of winning the NLCS as 23.2% and gives them a 55.7% chance of winning Game #6 in which Clayton Kershaw pitches. From those two pieces of information we can reverse engineer the Dodgers odds in Game #7. Below is a table showing this information. The math is getting a lot easier with only two possible games remaining.

Posted by Xeifrank at 7:54 PM No comments:

Oddly Enough for The Dodgers


Not hope remains for the Dodgers in the NLCS. Vegas odds give the Dodgers a 13.6% chance of winning the NLCS, a feat that would involve winning the last three games of the series, with the last two games being played in St.Louis. The Dodgers are a generous 61.8% Vegas favorite in Game #5 and knowing that and the 13.6% number we can reverse engineer the probable odds of Game #6 and Game #7. Also we can easily calculate the odds that the series ends in a 5, 6 or 7 game victory for the Cardinals or a seven game victory for the Dodgers.

Posted by Xeifrank at 9:00 AM No comments: Posted by Xeifrank at 8:36 AM No comments:


In case you've been on the moon or busy watching soccer there has been some discussion in Dodgers-Land about whether or not to skip Ricky Nolasco in Game #4 of the NLCS or bring back Zack Greinke to pitch on short rest. I decided to take a back of the envelope look at which decision is the correct way to go. My exercise won't go into the nitty-gritty details which would add a little more precision to the numbers but it will provide a good framework and maybe some guidance into what the best decision is.

In general there is a 0.5 RA/9ip penalty for pitching on three days rest and there is probably a little penalty for pitching on too many days rest but let's leave that number unknown for now. What I did is made a table with the RA/9 expectancies for each of the Dodgers four starting pitchers. Then output tables showing which starting pitching arrangement looks best. The RA/9ip estimates can be changed if you don't agree with them, this is just the framework and with the framework you can tell how bad of a pitcher Nolasco must be to make skipping him and starting Greinke (and even perhaps Kershaw and Ryu) on short rest.

Now let's come up with some rotation arrangements. Let's first start off with the one where Nolasco pitches Game #4 and Greinke, Kershaw and Ryu all pitch on regular rest.


This particular arrangement does not fair too well as you are applying four 0.5 RA/9ip penalties, adding up to 2.0 RA/9ip over four games. Nolasco's projection MUST be very very bad for this option to win out. How bad? I will visit that later.

Now onto the arrangement where Zack Greinke pitches Game #4 on short rest then Nolasco pitches Game #5 and Kershaw and Ryu pitch the last two games on full rest. I call this the "Rearranging The Deck Chairs" option.


This option always loses out to the first option as you are just swapping Game #4 and Game #5 starters and adding a penalty to Greinke's start. This option is stupid.

So it comes down to the first two options and the first option will win out unless you think that Nolasco is a terrible pitcher. Just how terrible in terms of RA/9ip? And you can feel free to combine Nolasco's RA/9ip with that of Volquez if you think they will tag team their start. Only good thing about that is that you can get an early pinch hitter at-bat in the game. But let's get back to the question of how bad would Nolasco's RA/9ip projection have to be to make the second option a better one than the third. The break even point for Nolasco's RA/9ip projection is 5.0. If you think his RA/9ip projection is worse than 5.0 then the second option would be better and you would go with a three man rotation. Of course there are some other minor things to take into consideration, so you could add or subtract those in to the RA/9ip projections but this exercise gives you an idea for which rotation arrangement is best.

I think the Dodgers should start Nolasco and if he isn't terribly sharp or being hit hard to pinch hit for him in either his first or second at-bat and then to use Volquez until he bats and then to let the bullpen finish out the game. Hopefully, you won't go extra innings as you will be using a lot of your bullets early on in the game.
Posted by Xeifrank at 2:40 PM No comments: 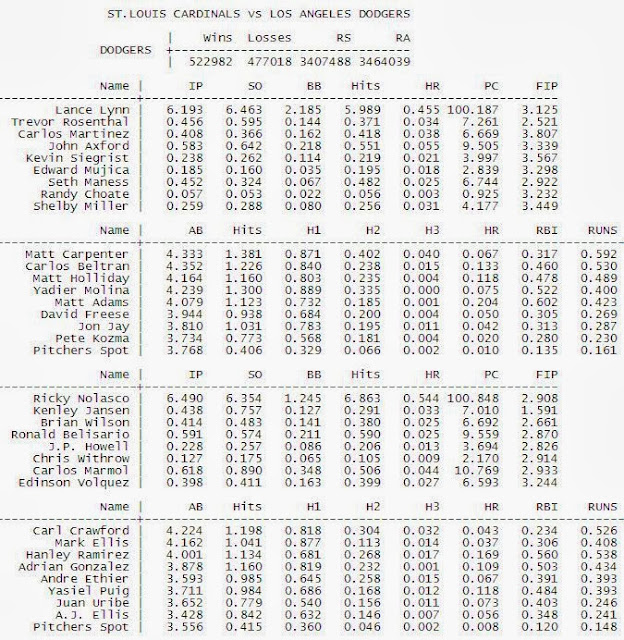 
Here is an updated list of the individual game odds for the remaining games of the NLCS. As a reminder, the way the game odds are calculated is take the Vegas odds of the Cardinals winning the NLCS, which the last time I looked was (-350, +290) 76.19% chance of winning. We can give the Dodgers a 0% chance of winning for the games they already lost and we can input a win probability of 47.4% for Game #3 as those odds have already been published. Now to figure out the odds of the remaining games (Games 4-7) we need to adjust them until the string of games gives us a 23.81% chance of the Dodgers winning the series. To do this, I used the nifty excel spreadsheet that one of my readers gave me in the comments of the previous post on this topic. While these won't be the likely odds for Games four thru seven they are good "ballpark" estimates. And if you don't agree with any of these game odds, that is fine... but you will need to adjust the odds of some of the other games to even out any changes you made one way or the other. 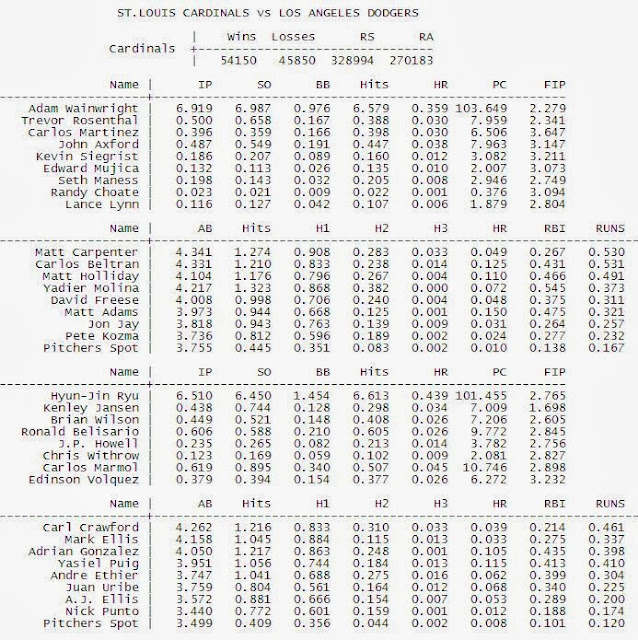 Posted by Xeifrank at 9:38 PM No comments: 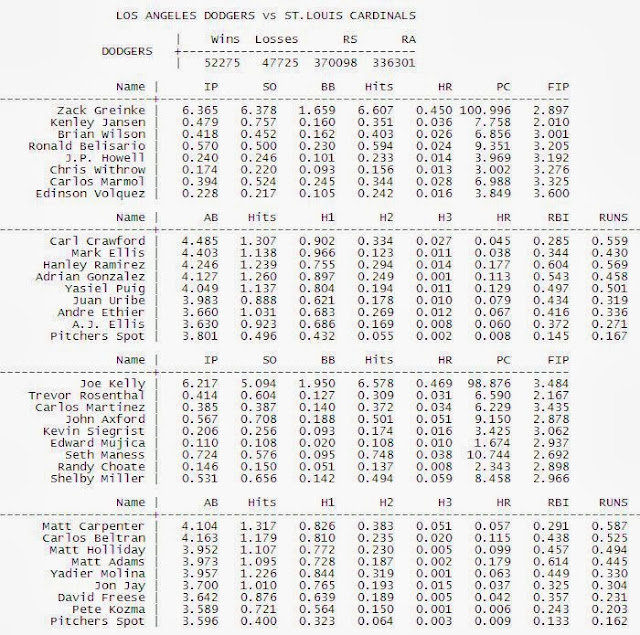 
Vegas has some out and made the Dodgers a 55.6% favorite to win the NLCS over the St.Louis Cardinals. So what I've done is gone ahead and assigned individual game win probabilities to each game not necessarily based off of what my sim outputted, but more along the lines of fudging the odds of all seven games in attempt to make the 55.6% come out as the true chances of winning the series for the Dodgers. Below is what I came up with.


I took this set of game win probabilities and put it in a C program that played a 7 game series one million times, using a random number generator to determine game winners and losers and the odds of the Dodgers winning the series came out to approximately 55.6% of the time. You can argue that the odds for an individual game are a little off, but where you lean one game matchup for one team, you need to lean another matchup for the other team. It doesn't matter if I swap Greinke and Kershaw (Games 1/2, 5/6) in the games they pitch in, the odds still come out the same. Where it might matter is having Kershaw available to pitch out of the pen in Game #7. Either way, the Dodgers surely do not want this series to go to a seventh game.
Posted by Xeifrank at 10:29 AM 8 comments: 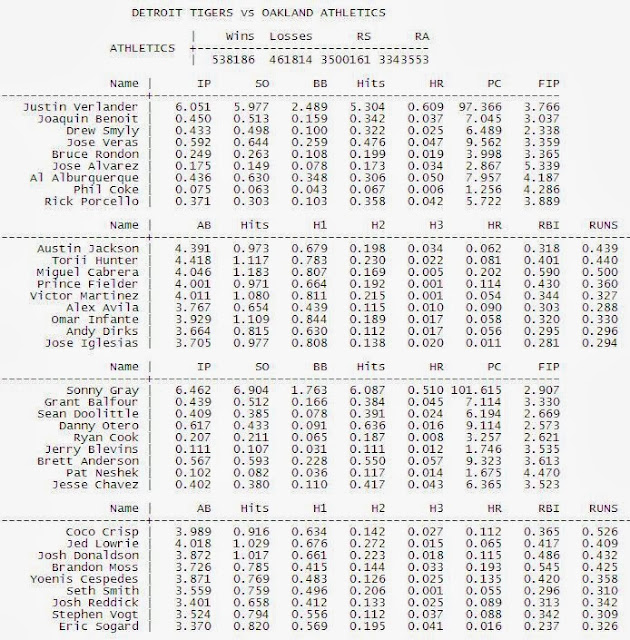 Note: Vegas favors the Tigers, with a 50.4% win probability 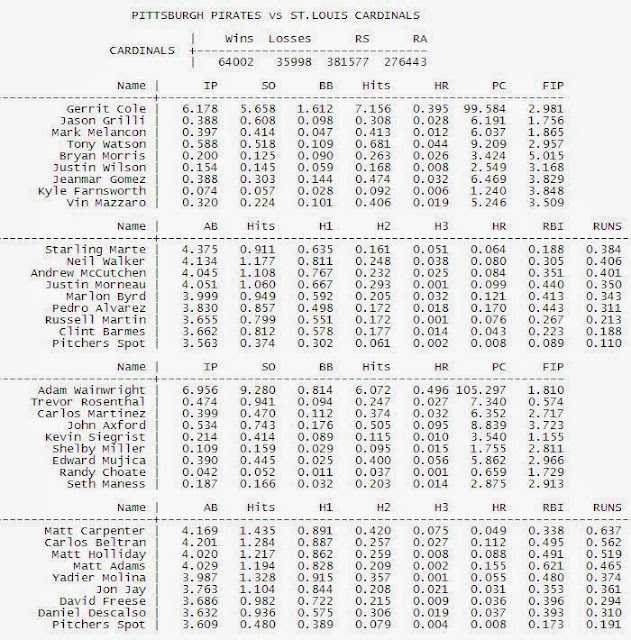 Note: Vegas gives the Cardinals a 59.92% chance of winning this game. 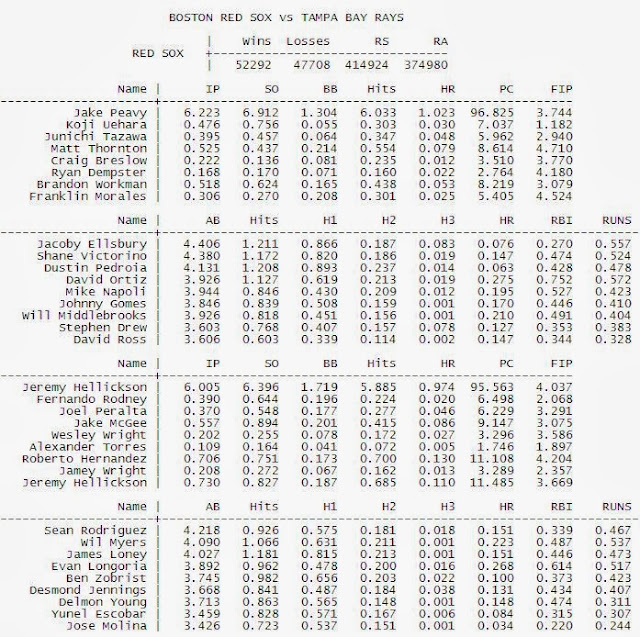 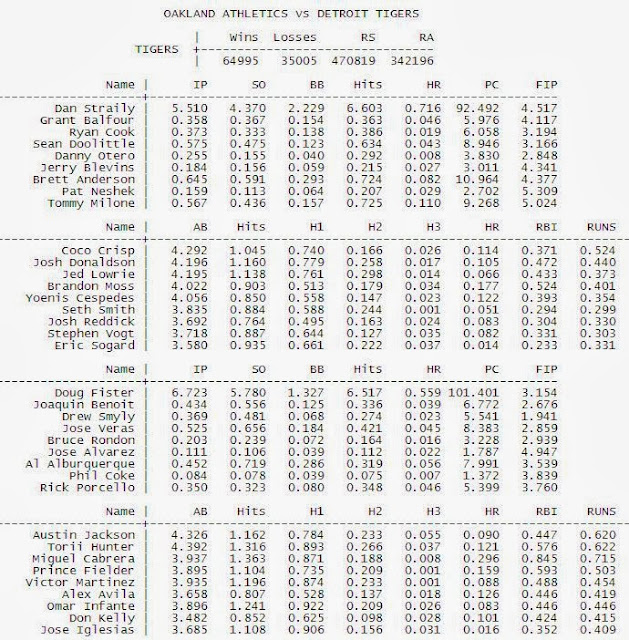