Top 20 Games With The Largest Favorites


I found the Top 20 games that had the largest Vegas favorite this season as I was curious to see which teams and or pitchers frequented the list. The Astros(9), Cubs(4) and Twins(3) were the teams that showed up the most on the losing side with the Tigers(6), Athletics(3) and Cardinals(3) showing up the most on the favored side. No pitcher on the favored side shows up more than twice (Verlander, Tanaka, Scherzer, Wainwright). A win expectancy of 73.28% was the largest favorite we have seen so far when Jarred Cossart and the Astros lost to Justin Verlander and the Tigers by the score of 2-0. In these 20 games (SSS) the favorites did very well. You'd expect them to win around 13 or 14 of the 20 games but they won 16 of them for an 80% winning percentage. Of course 20 games is a tiny sample so there is nothing out of the ordinary for winning 16 out of these 20 games. Anyways, most of the fun is just in the list... and here it is.

Posted by Xeifrank at 9:52 AM No comments:

.
Leverage index was a statistic invented by Tom Tango that measures the importance or pressure of a situation in a baseball game. An average leverage index is 1.0 and anything higher than that indicates that the current state is an above average pressure situation. I used my simulator to determine what the average leverage index was for when there were 0, 1 and 2 outs in any inning of a game. I then used the simulator to also determine the average leverage index for each half inning of a game. The results are below. For these simulations I used a few random games so results could be slightly different running other games but the trends should be similar.  The results are that you generally see higher leverage situations the lower the number of outs are and you also tend to see higher leverage situations later in the games.  Those conclusions may be obvious but at least you can get a visual image of it.  Five millions games were simulated.

Table 2
Average Leverage Index Based on Half Inning of Game (0=Top of first, 1=Bottom of first etc...) 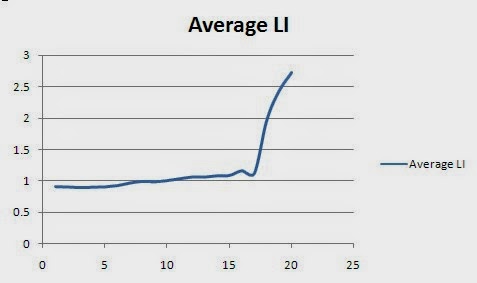 Email ThisBlogThis!Share to TwitterShare to FacebookShare to Pinterest
Labels: Sabermetrics

Posted by Xeifrank at 8:39 AM No comments:

How Is Vegas Doing On Park Factors?


Below is a table showing each teams actual park factor (runs) and the Vegas park factor which is calculated by reverse engineering their over/unders for each game and using that as a proxy for actual runs scored for each game. The table is sorted by which actual park factor is closest to the Vegas park factor. The teams at the top of the list are playing in a run environment at home close to where the betting public is predicting it to be. The teams at the bottom of the list are having a lot of random variation when it comes to their home park run environment so far in this young season. Small sample sizes and regression to the mean are at play here but it is interesting to see how things are shaping up so far with the empirical data. 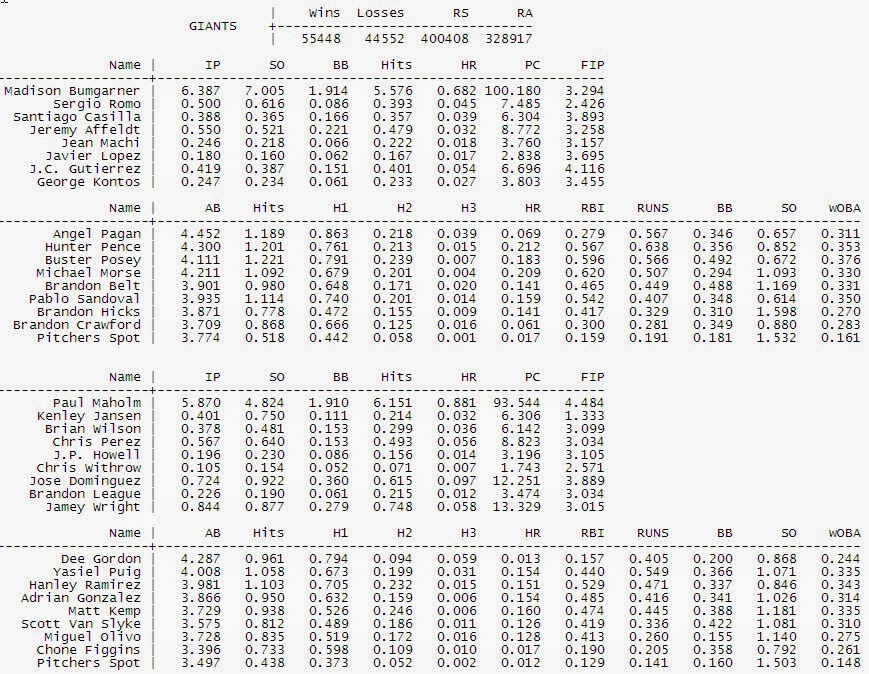 Posted by Xeifrank at 9:23 AM No comments:

Posted by Xeifrank at 7:34 PM No comments:

Notes: Table sorted by largest favorite
Posted by Xeifrank at 8:48 AM No comments: 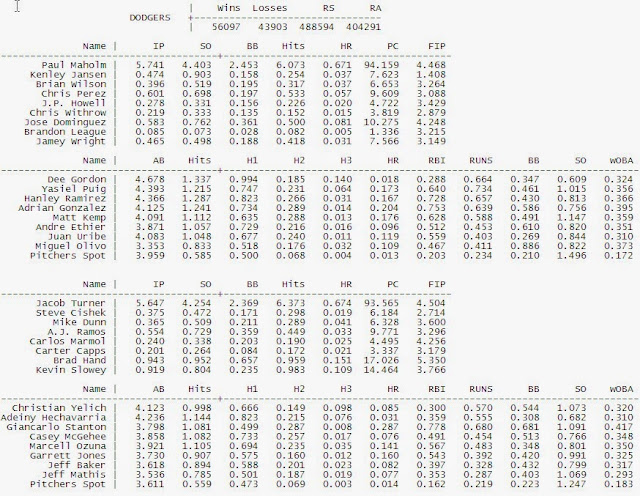 Disclaimer: Based off of 100K simulations with input statistics from Fangraphs Zips(U)

Posted by Xeifrank at 3:23 PM No comments:


Beyond The Boxscore and Tom Tango asked the following question.


To me it kind of seemed like a no brainer. I would rather keep the run off the board. So I put my simulator to the test to see what it thought. My simulator has an engine that worsens pitcher performance based on the number of pitches thrown. It is a good proxy for times through the batting order. Both have an effect on how a pitcher usually gets worse as the game goes on.

What I did is take a game between the Dodgers and Twins early in the week where Zack Greinke pitched against Kyle Gibson. First off, I simulated the game from the very beginning to set a baseline for how often the Dodgers should win this game and how long and how well Zack Greinke pitches. Next, I set the game state to the top of the second inning with the first batter of the inning up. I tell the simulator that the Dodgers number five hitter leads off the 2nd inning and the Twins number six hitter leads off the bottom half. These settings are then kept constant for the remaining trials.

Up next I ran the simulation with Greinke having made 40 pitches in the first inning but not having given up a run. So the score is tied 0-0 in the top of the 2nd. The Dodgers have a pretty good bullpen on paper (projection systems) and some of their long reliever options are not terrible.

Then for fun I had Greinke throw both an 80 and a 100 pitch first inning with the score tied 0-0 heading in to the second inning. Those results are below. I think the one run hole that the away team is put in is a much much larger hole than a first inning where a starting pitcher throws 40 vs 10 pitches. And of course the difference will be a little bit different for each team based on the differences in talent level of the starting pitcher and the bullpen, namely the long reliever. My study just looks at one game but the nearly two innings lost from the starting pitcher will have an impact on the next couple of games as the bullpen will be tired and perhaps a few of them unavailable to pitch the next game. So you can take my results and adjust for those things I just mentioned but I think it is more than safe to say that for a one time deal, the 40 pitch no run first inning is a much better scenario for the Dodgers.